Now we're really under the gun. Or, at least my long-suffering husband is in that position.

K has been working extra hard on the house, taking time from work to put time into the house. The theatre kicks into high gear production schedule in the spring and once that happens, there'll be little time DIYing.

And not only that, but it's almost time again for the Before and After Contest over at One Project Closer. We didn't have anything ready to enter last year and I'm determined to have an entry this year.

So . . . we spent our precious Saturday morning at Superior Moulding 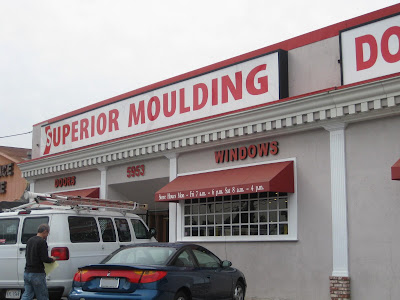 where we bought a gazillion wooden switch plates (wow, those really add up! Why did I complain so much about not having enough outlets??) and we bought picture rail. Here's a pic of K loading a 16' length of picture rail into his sports car: 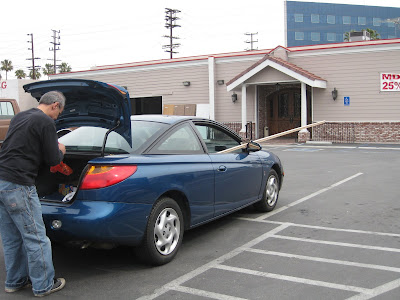 He looks like he's on his way to a jousting tournament.

While we were there, we saw an HGTV host and camera guy shopping and recording the host's design process. It was for The $250,000 Challenge. That's gotta be the one HGTV show I don't know. 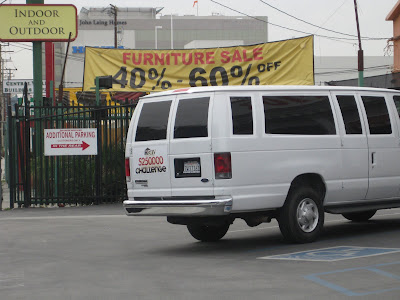 Take a look at carved pieces we could have selected (but didn't): 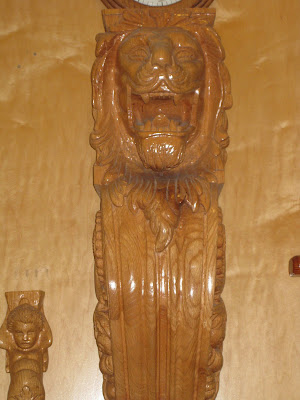 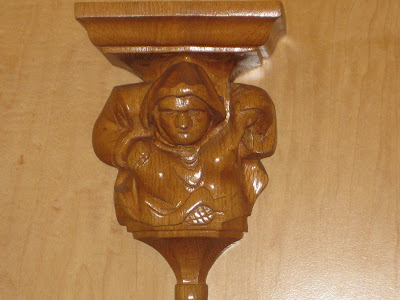 Once we got home with the picture rail, turns out there was a misunderstanding about how much picture rail there should be. Mmm. I guess we don't read each other's minds after all.
So as I was saying, I really want to have something ready for this year's Before and After contest. Last year, I was certain we'd have at least one room complete by summer's end but with working on 4 rooms simultaneously, that just didn't happen. Still hasn't. But we're close. Anyway, the contest is that you enter before and after pictures of any home improvement project you've completed during the past year. Each week they will be showcasing two projects (one on Wednesday and one on Sunday.) And, not only will there be weekly prizes for the submitters, One Project Closer will also be making bi-weekly donations to Habitat for Humanity. How cool is that? And . . . at the end of the contest period, there will be a grand prize for the winning entry selected by readers. You should check out their blog if you haven't already. It's a great resource with all kinds of how-to posts and tool reviews. And you gotta love any contest that supports a great cause like Habitat for Humanity and gives you the chance to see before and after pics of other people's projects.
Today? I've got a date with some Minwax and those cows.
Posted by Why S? at 10:19 AM

A whole store for mouldings...hmm.....wish we had one of those near by. Glad to hear you'll be joining the ranks for the Before and After this year that Fred and Ethan do at OPC.

Wow those moldings are downright terrifying

I love superior moulding! They are pretty expensive though. Another fun place to look at is
http://vintagewoodworks.stores.yahoo.net/headblocks.html