Channel Your Inner Carrot and Stick

This video showing Matt Damon confronted by a Reason.tv "reporter" has been making the rounds among my Facebook cohorts:
The woman suggests that it is the threat of job insecurity that inspires Damon to be a better actor and that the same insecurity might give us better teachers.  Then the cameraman goes on to make the statement that 10% of all teachers are bad teachers (ignoring that it's likely that over 10% of all actors are bad actors - so much for that logic).

This theory is part of the same thinking that says if we were forced to pay more in taxes, why would we work any harder?  Why, they always ask, would we be better at what we do if we have to give up more of what we earn?  Why would Joe the Plumber want to own his own company if he had to pay taxes on it? (as if Joe the Whatever were paying his taxes anyway; which he was not.)  Gee, Joe, maybe the satisfaction of being your own boss? Of doing things your way?  Of meeting the challenge?
Will job insecurity really inspire us all to be better at our jobs?  Would it inspire you to be better at your job?  I think it would only inspire me to always be searching for another job. Why can’t we all just be as good as we can be at what we do?  Do threats or fear really make anyone better at anything?  Will it make us more creative? More productive?  More ingenious?  Or will it only make us more manipulative? More kiss-assey?  Better ass-coverers?

It does not occur to the idiot interviewer that Mr. Damon would strive to be better at his profession because he loves and respects the art form and wants to honor it by doing the best job he can do.  It does not occur to her that he takes pride in himself and in his work and that alone could motivate him to be better at what he does.  Similarly, there are teachers who do their best just because they want to be good teachers.  This does not occur to this half-wit with a mic because she subscribes to a paradigm in which everybody is out for themselves and out to screw everyone else and that any effort that does not result in an outward-focused, self-serving reward is not an effort worth making.  It is impossible for her to perceive that everyone is not like her.
And what kind of future are we creating when we raise children in a culture where everybody gets a medal or a bumper sticker just for showing up, only to later toss them into an adult society where we reward only the most aggressively greedy?  Give those kiddies enough video games and we've got cannon fodder for decades.

It doesn't surprise me that she doesn't respect actors or teachers.  It's common.  Both professions are, in practice, much more difficult than they appear to be.

But the end-result of this belief that we are all only motivated to do things to benefit ourselves is that in the end, as a society we will all end up doing things only for ourselves and we'll do nothing for the common good, nothing to benefit society - like teach.  Is it possible that they are so fearful of anything that even hints at socialism that anything and everything (even teaching) must be motivated only by selfish gain?

It goes back to the tax question.  If we are not willing to pay more in taxes as our income increases, then we are saying that we truly have no concern for the common good.  We are saying we don't care about the educational system.  We are saying we don't care about infrastructure.  We are saying that we don't care about the environment, law enforcement, our fire departments, food safety, the FAA, the FBI or NASA.  We are saying that we don't even care about the things so many of us say we care about, like homeland security, military defense and border patrol.
They're doing their best to make the whole idea of tax increases seem treasonous.  Sure, let's reward the rich at the expense of everyone else.  Give them tax breaks.  Why should they pay taxes on the money that they earned with their money?  If our schools are failing, then according to their logic it's because tenure makes teachers too cocky and lazy.  It's certainly not because schools are underfunded and undervalued.  How is it the fault of the no-new-taxes crowd that educational resources are becoming increasingly limited, forcing young people into military service just to get by?  It would be convenient to think that the anti-tax supporters have all their kids in private schools anyway.  But they don't.  It's just that they all drank the no-new-tax Kool-Aid and would rather let their kids get a sub-standard education than add to anything that might suggest social good - 'cause it's got that nasty word "social" in it.

In their world, taxes are always job-killers.   A bad system of education never is.

Strange how tax breaks for the rich have not been enough to inspire me to be rich.   Maybe a bigger break will finally give me the kick in the pants I need to accumulate a massive amount of wealth.

It's one thing to have actors and teachers motivated only by career advancement, when our elected officials go to the extreme, we get the current crop in Congress.  We all know the Republicans have long cared for nothing other than keeping their own party in power.  Recent games with our financial situation resulted in losses that will be very hurtful to a lot of people. Does anyone think the leaders of the Republican party cares?  They don't care.  They only care about staying in power through convincing a bunch of people a lot less fortunate than themselves that their tax money might be given to someone who didn't work quite as hard as they did.

Maybe right-wing politicians don't do anything for the people because to do anything for the people reeks of socialism.
If you're still thinking that greed and career advancement is the best of motivators, wasn’t it greed and career advancement that led to the Madoff debacle? The housing market collapse? The Enron scandal? The savings and loan crisis? Teapot Dome? The Yazoo Land Scandal?
Does anyone look forward to more of all that?

Don't listen to them.  Do whatever it is that you do but do your best to do it well and not because you just want to keep your job but because you want to do your job.  Do something for the greater good, not for your personal good.  You'll be dead soon enough anyway.  There will still be a world left when you're gone.

And the those others?  Let them eat their young. 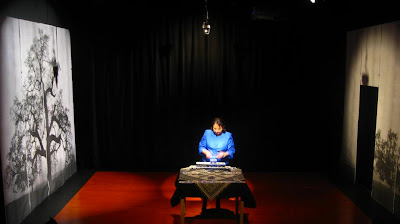 It’s done.  It was good.  Doing it made me happy.  For a while anyway.
My house isn’t quite done yet.  We still haven’t replaced the crappy aluminum siding.   The backyard needs redoing.
There’s some interior stuff that still wants doing.
For instance, somebody needs to build some doors or something to hide the stuff we store on the shelves on the wall in front of the stairway. 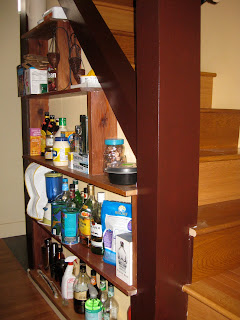 People really don't need to see where we keep our booze, the cat food, a jar of pennies and the back-up mayonnaise (in the event of a lapse or failure of the first mayonnaise.)  Now that I look at the picture, someone also needs to dab a bit of stain on the end of that stair step.

And somebody needs to complete this tile in the kitchen (site of an unfortunate failure to communicate.) 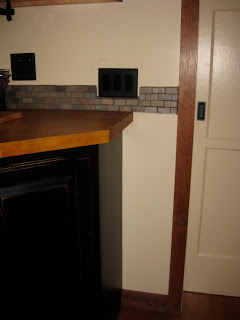 And then somebody else needs to get started on her next play.
The House on Red Hill is supposed to be a house blog (and a little bit more).  And for seven years I was obsessed with my house.  But when my obsessions change, how does my blog change?
I guess we’ll see.   Qué será, será.
I hope you keep reading.  But more, I hope I can keep writing.
Posted by Why S? at 6:18 PM 3 comments: