Eureka! Fern Canyon and a Glimpse of Redwoods

This is my last post about my August trip to Eureka and then I'll shut up. It deserves three posts because there was so much to say about it.

On two separate afternoons I did something I rarely do; I spent time outdoors. I'm not outdoorsy; never have been; everyone can get over it; it's just not my thing. I donate to The Nature Conservancy, Greenpeace, The Natural Resources Defense Council. I prefer to support Nature in that "Let me write you a check" kind of way.

However . . . my life in California has been woefully deprived of redwoods. And while there was not enough time in this trip to really do redwoods right, I did have a chance to spend an afternoon walking around Sequoia Park. The park is like a tiny little forest within the city of Eureka. In way, it's kind of like a Disney forest, full of beautiful things to see, but totally safe (no bears, no pumas*, no way to get lost).

We parked near a pond and stepped into the woods - 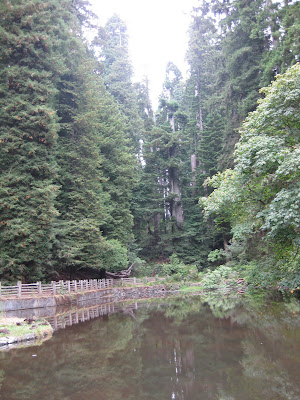 There were many paths to explore - 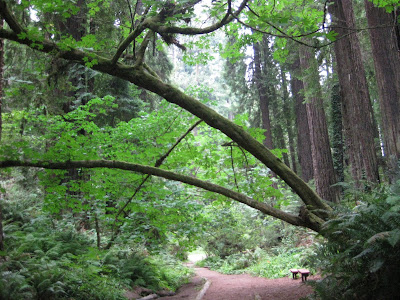 and ancient, exposed roots for him and me to climb - 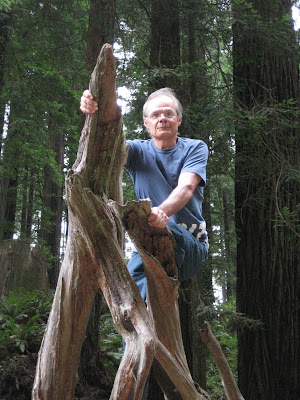 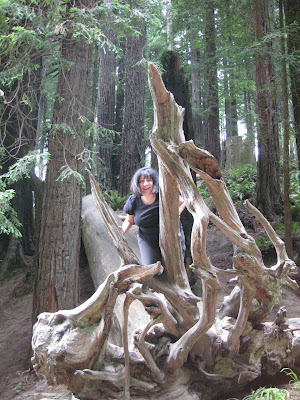 Ferns grew in damp, grottoes fed by trickles that appeared out of nowhere - 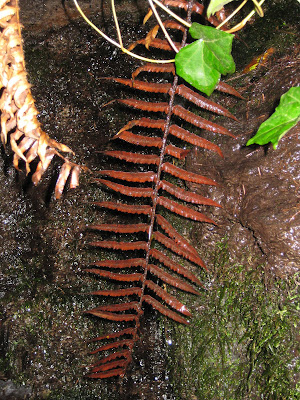 and all around us light filtered through shades of green - 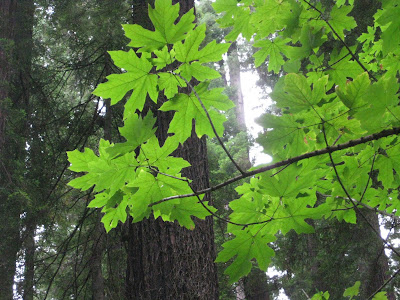 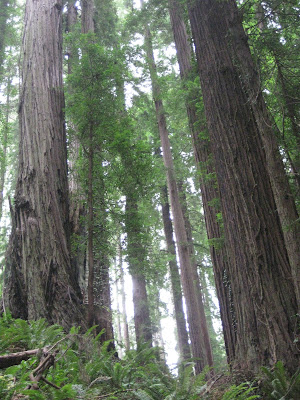 The next day, we took a drive (a long drive) to Fern Canyon. Fern Canyon is exactly that. It's literally a canyon of ferns. Even Wikipedia doesn’t have much more to say about it.

Here's the path. See those plants growing on the walls of the canyon? Ferns. All ferns. Miles and miles of ferns. 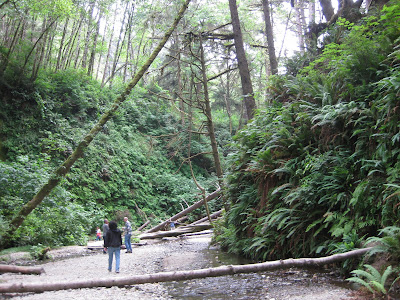 The evading figure below is my sister doing her best Bigfoot impression. There's a lot of Bigfoot lore in the area but I believe she wears a size 6 shoe so she can't be blamed - 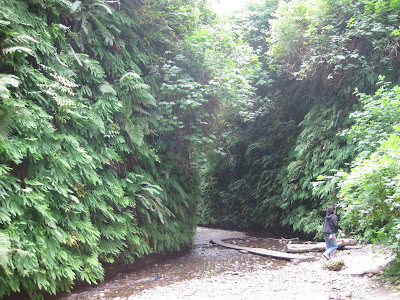 See this romantic pair? Us. This was the one time I forgot to ask, "does this denim jacket wrapped around my waist make me look fat?" Bigfoot should have said something before she snapped the picture - 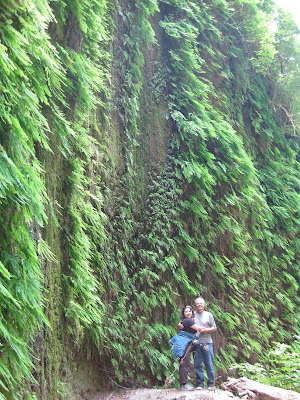 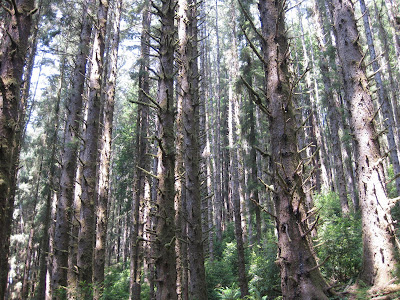 The next time I go to Fern Canyon, I'll have a better breakfast, a lighter jacket and an earlier start. There's a lot of trail and we did maybe a fifth of it. The worst part? Not very elegant restrooms. I think that may be one of the things that keeps me out of the outdoors.
All over the place in Humboldt County, even in the forest, we saw these tsunami warning signs (I love the little guy frantically climbing that hill ahead of that ginormous wave) - Don't even think of finding shelter at the Post Office - 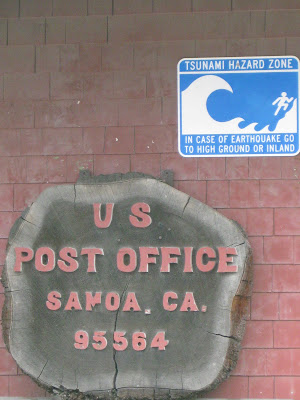 Speaking of little guy, what about this one who finds shelter in a rose? - 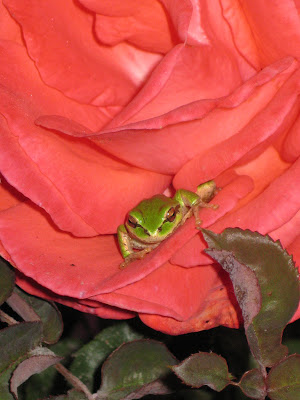 I didn't kiss him but he seems to lead a pretty princely life.

It took me a long time to get up to Humboldt County. But it won't take me that long to get back.

I confess, I'm hooked on the beauties of Humboldt County. This post joins the Friday blog parties at Hooked on Houses and The Inspired Room’s Beautiful Life Friday. Do check them out to see what others are hooked on and where others find beauty.

* Correction: At 8:30 this morning I realized how ridiculous the reference to pumas was. Aren't mountain lions mostly desert dwellers? If I'd visualized the forest-dwelling puma attack before typing, I would have realized that. But it was 2:00 in morning so I'll cut myself some slack. I should have written "deer." I think I heard that more Americans are attacked by angry deer each year than by bears and mountain lions combined. I don't blame them. I, myself, am quite often angered by the sight of anyone wearing orange.

I've been neglecting my email lately. So imagine my surprise to read last night that our kitchen and dining room remodel was selected by One Project Closer to be featured this week in their Summer Before and After Contest.

Woo hoo! Yeah, it's cool to get the prize gift card but aside from any prizes, it's just really cool anyway. And of course, the real prize is that One Project Closer does it all in the service of Habitat for Humanity. They're donating money and raising awareness and giving us all the chance to show off our hard work.

If you have any DIY projects to brag about at all, the contest ends September 20th, so you only have a few days left to submit your own entry. No time to waste. There's a grand prize to be selected from the weekly winners so get your story and pictures in to them NOW!

And thanks again Fred, Kim, Ethan and Jocie!