To Be but Not to Be

I’ve noticed that each passing television season brings a greater number of shows dealing with the question of those who cannot die.

First it was HBO’s True Blood with its Southern Gothic vampire culture. Then it was my personal favorite from last spring, The Walking Dead, a tale of survivors surviving a plague of zombie-ism.  Then Torchwood.  In the world of Torchwood, people suddenly stopped dying. They still suffered wounds and disease and the attendant pain of their wounds and disease but they do not suffer death.  They just go on – in pain.

So what is with all the un-death and un-dying on cable TV these days?  Are our greatest anxieties in the 21st century now spurred not by death-too-soon but by life-too-long?

What is behind this anxiety?  In a post-Cold War America have we created a new foe – the undead? Without an H-bomb wielding, Totalitarian Other, could it be that our greatest fear is now not death but un-death?

When I was a kiddie going to catechism class once a week, we worried about death by mushroom cloud and Everlasting Life meant you went to Heaven to live with Jesus and he stood by your side with his arm around you and you carried a little lamb in your arm and everything was nice for all eternity.

Now, everlasting life means a Hell in which we all just keep living with each other.

In the vampire tales we fear the eternally beautiful.  In the zombie apocalypse, we fear our own neighbors.  Like the vampires, they feed on us and they make us like them but there is no eternity with porcelain skin and daytime hours spent in repose.  There is only decay and mindless feasting on flesh and plodding, stumbling locomotion.  Mindless motion.  Always mindless.  Always in motion.

But it seems to me that the key difference is not beauty vs. decay or stumble vs. flight or gruesome vs. elegant.  The key difference is stranger vs. neighbor.  The vampire always first comes to us as an exotic stranger.  The zombies are always our neighbors and if not our immediate neighbors then they are people who were once so very much like us – ordinary people who lived ordinary lives until one day they found themselves in the path of a zombie swarm and now they populate a zombie swarm and threaten us and our way of life.

Is that where we are?  We fear that life has become an everlasting hell and the source of that hell is the Others among us. Not only do we fear their very “otherness” but we fear that we will become them.  We fear they will feed on us and turn us into them.  Cannibalize and convert.

So who are the Others we fear?  Maybe this person – Melissa Brookstone – a Tea Party blogger and a business owner who has resolved that “I will not hire a single person until this war against business and my country is stopped. I hereby declare that my job creation potential is now ceased.”

Really?  Her plan is to destroy the President by refusing to hire.  She could potentially provide employment to someone in her community but she won’t, even to her own detriment, just to strike a blow against the current administration.

Wow.  Sounds like cannibalizing to me.  This woman scares me.  In reading the comments of her supporters on her blog, there’s a whole swarm of them out there who scare me.  They’re in mindless motion.  Mindless, completely mindless.

In ten years we’ve gone to being the most united we’ve ever been to perhaps the most divided we’ve been in a long, long time.

We fear the divide. 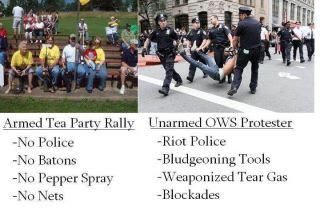 Even Fed Ex is worried -

Rejuvenation! In the Flesh!

Remember back when I blogged about Rejuvenation Hardware coming to my own fair city? Well, tonight was the gala grand opening party and I was there to give you a report.

Let me tell you, I walked in and was so overcome with the need to visit every gorgeous little item, I could barely settle down to enjoy the dippables and savories on hand.  But they did have a very welcoming offering of beverages, of which I was happy to partake - 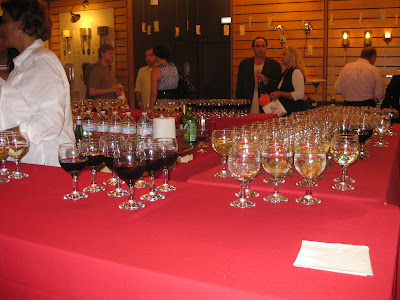 The first thing you see as you walk in the a lovely, metal Bear of California - 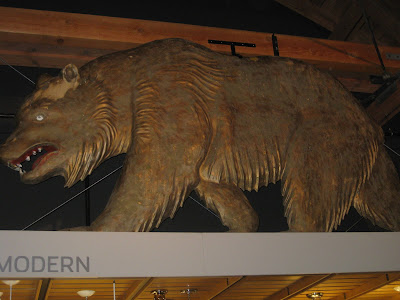 Then I moved on to the wall of hardware - 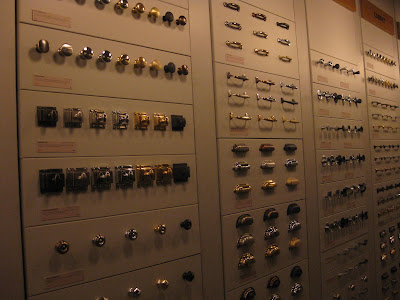 and immediately zeroed in on the picture hooks - 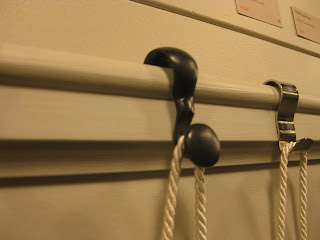 This is the one I deemed most appropriate for my home.  I've got 29 hooks holding up art and a mirror in my house.  At $5 each, the replacement process will be slow.


After seeing these, K semi-regretted not going with push-button switches - 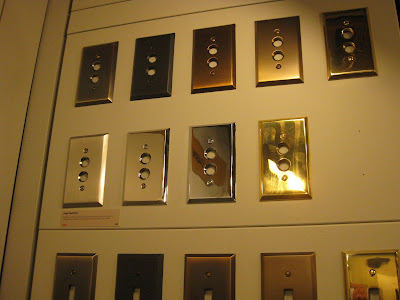 Ooh!  and check out these serving pieces! 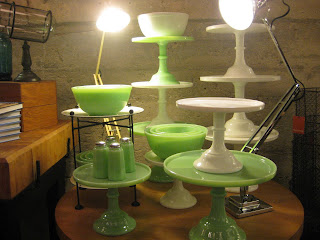 Those green glass bowls could almost drive me to baking!
Nah, not really.  I just want to own them without
actually using them.


Ahh!  I love this deco sconce.  Not right for my 1909 house but gorgeous nonetheless - 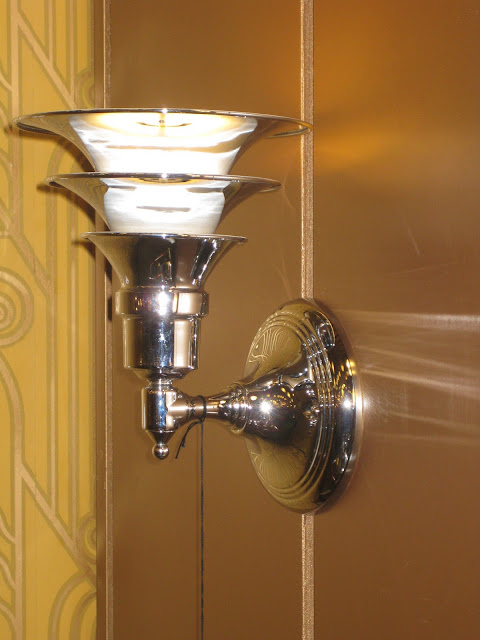 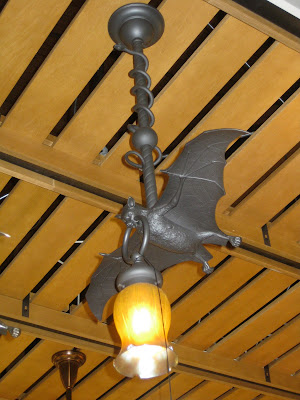 Not for me but still charming. 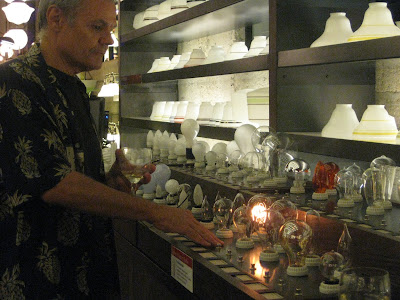 Pick a wattage - any wattage. 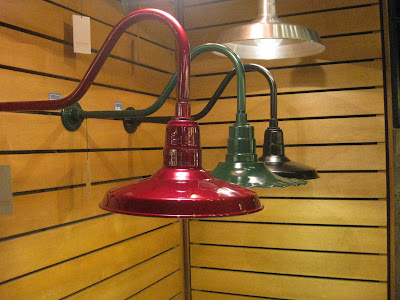 An remember Bruno from the previous post?  I finally found him.  He was discreetly placed - 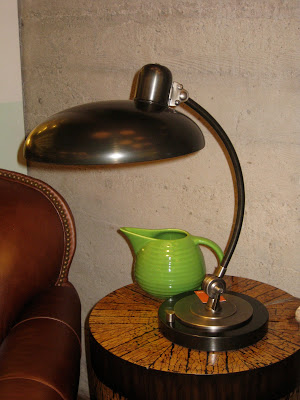 I relocated the sweet little Bauer pitcher so she
could share the picture with Bruno.

I'm still  considering Bruno, but in reality, his shade is larger than it appeared in the catalog and now I'm really at a loss for where he'll fit.  But he's still a beauty.

As we were leaving, this caught our eyes - 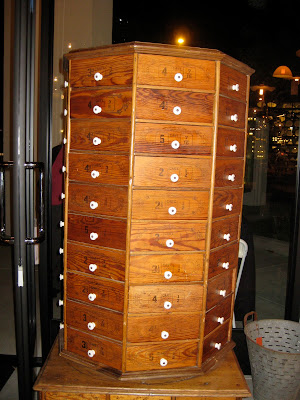 It's a tower of little triangular drawers,
each marked for a different size screw. 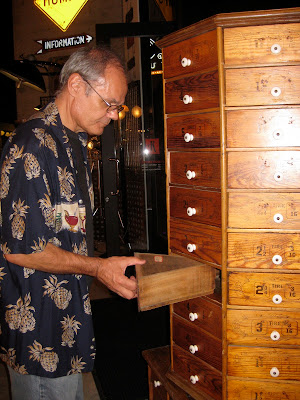 Owning this would mean the end of hoarding all
those little pot-bellied soup cans from Trader Joe's.
I repeat, a different drawer for each size screw.  And it spins.  Spins!  I don't even use tools and I want this cabinet.

And if you read the comments to my last Rejuvenation post, you'll remember Nicole from Rejuvenation.  She was kind of enough to invite me to the gala (and to give me the source of the name for the light "Hood." Well she was there!  And we met! 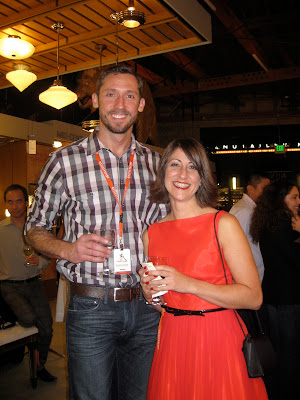 Nicole was awfully gracious, as was her colleague, Jason.  Apparently, nice people work at Rejuvenation.

A Thought for a Sunday 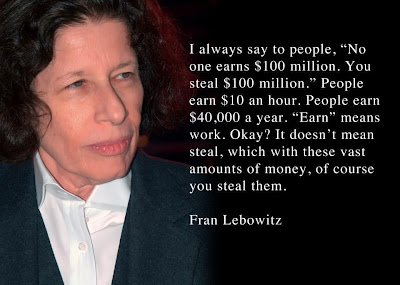 Woo hoo!  A Rejuvenation store has opened in Los Angeles! 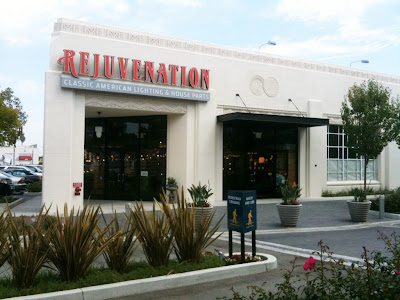 No longer must my drooling over reproduction vintage lighting and fixtures be limited to a catalog.  Now I can slobber in an actual store.  Life is looking up.

I haven't had a chance to actually visit the store since its September 17th opening but I hope for the same well-detailed, thoughtfully-planned layout as the catalog's. 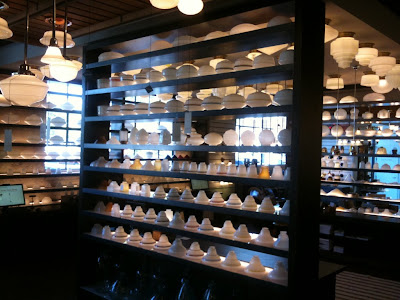 I can't wait to meet in person the delightfully designed (if unfortunately named) "Hood."

Oh, Skyport!  How I long to breakfast with The Jetsons under your polished nickel reflections! 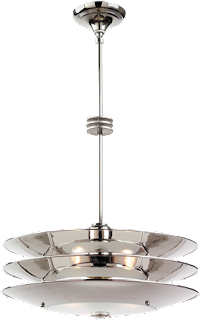 (Skyport also comes in an "Old Brass" finish, though I'm not sure why.)


And you, saucy little Dorena!  You remind me again why Deco is my favorite of all design eras.

And yet, how ironic, now that Rejuvenation has arrived in the flesh, I am really not in need of lighting fixtures.  Although, Bruno here is an adorable little desk lamp - 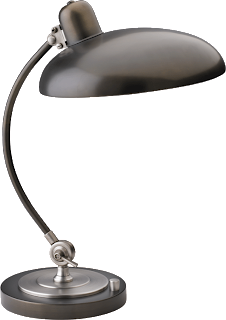 And who among us couldn't use an adorable little desk lamp?

It's probably just as well all (most) of my lighting needs have been met.  Lamps from Rejuvenation are a little on the pricey side - but, they are made in the US.  See this previous post. 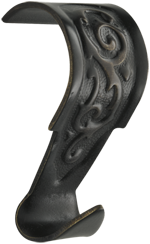 At $5 per hook, and eight pictures hanging from picture rail in the guest bath alone, I might as well buy myself a lamp.  Oh well.  Since when does shopping mean I have to buy something?


Watch them hand-craft your fixture here -