Because it had been turned into a duplex, our house came with two living rooms (and two kitchens). The original 1909 dining room became a living room.
And because neither of the two bedrooms was big enough to accommodate our queen size bed, and all its attendant furniture, we spent the first two years of our residency here sleeping in the original living room. (if you zoom in on this picture, through the doorway you can see the unmade bed and one hemp slipper.) 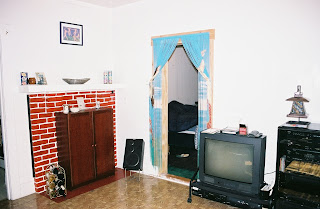 We blocked the hideous fireplace to keep out the cat – and because there was no place else for that Ikea piece that was providing much needed storage, since the kitchen was pretty much a disaster.

K had to cut a doorway into the wall so we wouldn’t have to go outside and across the porch to get to the kitchen. Friends gave us that beaded curtain. 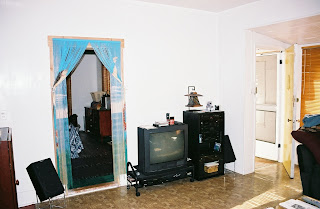 Do not fail to take note of the horrible faux parquet peel n’ stick vinyl floor tiles. There was more than one layer of this in some parts. And, please notice the white. How could you not notice the white? Blazing, unforgiving White beating down from every wall, every ceiling, every piece of trim. The whole house was whiter than globs of mayonaisse and Cool Whip smeared onto a meeting of the Dick Cheney Fan Club. (yes, there actually is such a thing.)

In November of ’07, the white was carted off to a dumpster – 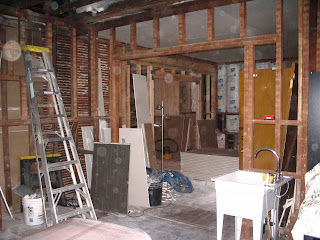 In January of '08, the hideous fireplace was condemned.

In June of '08, the kitten finally seemed confident that it would all be all right - 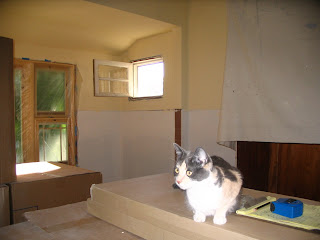 I believe she is sitting on the delivery of kitchen cabinets. Notice that she has her tape measure at the ready. She is truly her daddy's kitten.

Now finally, the house has its dining room back – 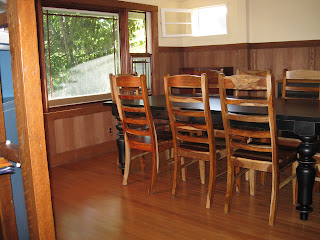 You may not have noticed, but in the pictures of our kitchen, there was no refrigerator. It literally did not fit in the kitchen, at least not without sticking into the hall doorway or without blocking something else when the door was opened. There was no getting around it. The fridge had to straddle the kitchen/dining room. And in my bizarre mind, covering the top half with art magnets hides it a little. That, and the fact that the fridge is black, like the cabinets and the dishwasher. 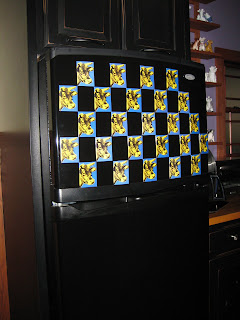 It’s almost like you don’t even notice it’s there. It’s practically disappeared. One could starve to death looking for the refrigerator. 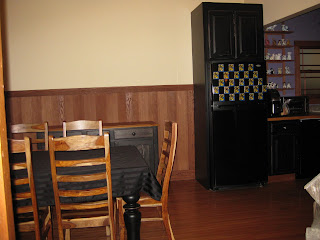 The upside is that it’s handy for when you’re sitting at the table and you’re too lazy to get out of your chair for another glass of tea. You just reach over, open the fridge door and there it is.

Speaking of table, this one seats 8 at its minimum length and up to 12 with both leaves. We haven’t put in both leaves yet. Once we put in one leaf to seat 10. Ten was ok. I imagine 12 would be cozy but it would be doable. That’s what I love about this room, just the idea of dinner parties for 10 or 12. 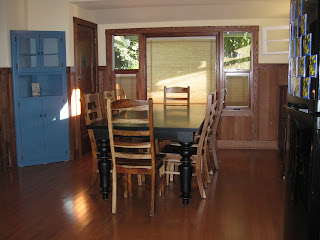 It’s stark though, isn’t it? We still have to hang some art over the buffet. Maybe add some things to the mantle. I don’t want to clutter it, though. There’s always that danger with us.

The spare quality strikes me as a bit Scandinavian. It makes me think of a Swedish farmhouse (as if I knew what such a thing looked like). Maybe it’s the ladderback wooden chairs against the massive table. Maybe it’s the weathered old Adirondack. 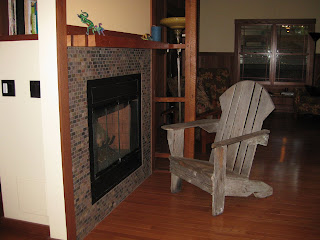 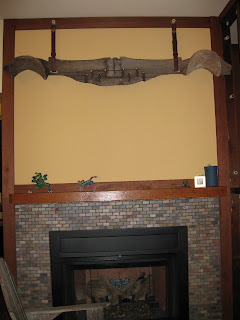 If you can ignore the Warhol magnets, to me, it looks like a room where people with callused hands give thanks to a harsh Protestant god before enjoying a simple meal of root vegetables and freshly made bread.

Instead, I will lift my tiny manicured hand and drink a toast to Hestia, Goddess of Hearth and Home and of course, to Dionysus, God of Wine and Theatre.
And then I guess I'll have something delivered. 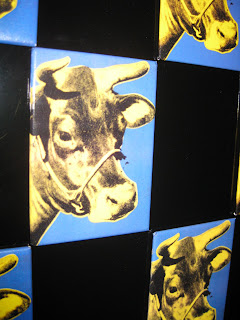 Above the City said...

Wow, what a difference!!

I am in Escrow for a 101 year old house. I can't wait to personalize it with my style!

....whereby she took out her cow creamers and plopped down a handful of Warhol refrigerator magnets on the otherwise uber stoic desk and said "design a kitchen/dining area around this."

Love, Love, LOVE it! Don't forget to serve yourself a healthy portion of self-satisfaction the next time you sit down in that dining room as congratulations for a job well done. It's awesome!

Thank you to Above the City and to everyone for your support of our farm-ish kitchen/dining room.

Debbie, I look forward to watching your progress with your new home. Congratulations and good luck.

TMA, that's very funny. If I had been handed that challenge at the beginning I would have been completely stumped.

Thanks, modernemama. It took a few trips to the MOCA gift store to collect enough magnets - sometimes parking in a loading zone with just enough time to run in a buy a few more - betting against a parking ticket.

NV, I've got a big pot self-satisfaction stew on the stove now. Mmm!