We Shoot Game Shows, Don't We?

Last week I was in a meeting in which the ratings for the new game show, Minute to Win It was given a lot of attention.  We all want to know how it's doing.

You must have seen the TV ads for it. No?  Here then:


There is something creepy about this show. Maybe it's the futuristic set that reminds me of Logan's Run or Rollerball. Maybe it's the dark anti-lighting and the beams of light that move through the set like ray guns.

Maybe it's the desperation built up by the voiceover and cliched Sci Fi graphics combined with the extremely limited increment of time in which a life could be changed forever. Or not.

We watch them scramble for it for the sake of our entertainment.

We like to say we live in a meritocracy; a place where the skilled are rewarded for their excellence.   But as in much of life, in this show, the possibility of success is stacked against the contestants.

Shh . . . don't tell anyone but during the recitation of the ratings for Minute to Win It, all I could think of was They Shoot Horses, Don't They? a film about a group of desperate people exploited for the amusement of onlookers in a dance marathon.

Back during the Great Depression, they had dance marathons.  For the promise of a cash prize, people danced until they dropped.  Sometimes they even dropped dead.

While I was thinking of the movie and the dance marathons, it occurred to me that game shows and reality television may one day be the only path to earning money remaining in America. Farm land has been eaten by housing tracts that now sit foreclosed upon. Manufacturing is gone.  Even customer service is out sourced.  What have we left but our competitive spirit and our couch potato love of seeing others struggle and compete?

Are we a bread and circus nation, except without the part about the bread?  All circus; no bread.

I used to like game shows.  But now the stakes are so high and the lighting so ominous and in an age of so much desperation, it seems cruel to offer up so much with so little chance at winning.  Did the $64,000 Question seem this cruel?

Me, I'll just keep playing Super Lotto as my path to riches plan of choice.
Posted by Why S? at 11:41 PM 7 comments:

The L.A. Marathon Passes Us By

Even as I type this, the LA Marathon is happening right around the corner.  Every year we worry about the road closures and detours.  Every year we realize later that the marathon is pretty much done before we even get out of bed.
This year, we were up early enough to actually see some of the runners.  Coffee and camera in hand, we strolled around the corner to catch the action. 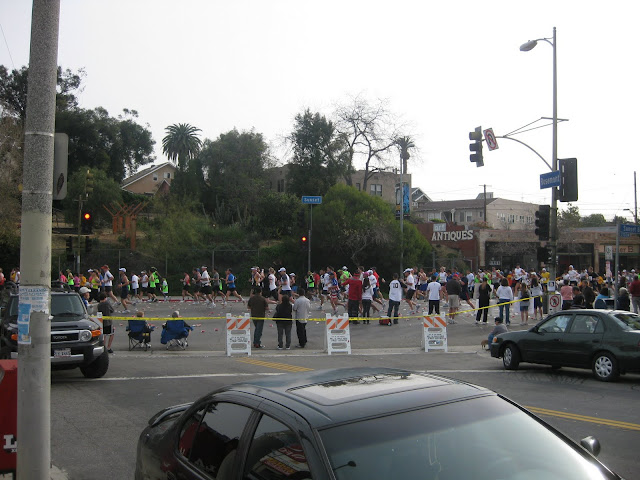 The runners come in all shapes and sizes. 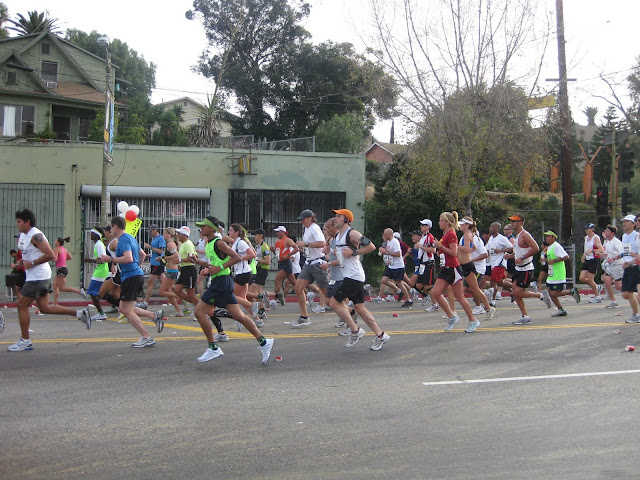 For example, here's an ersatz Minnie - 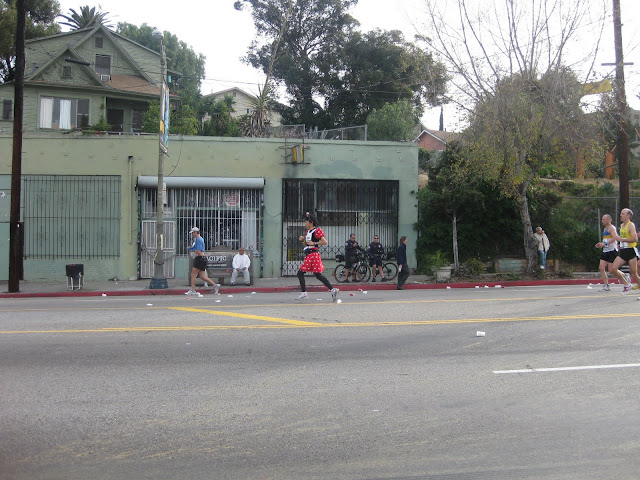 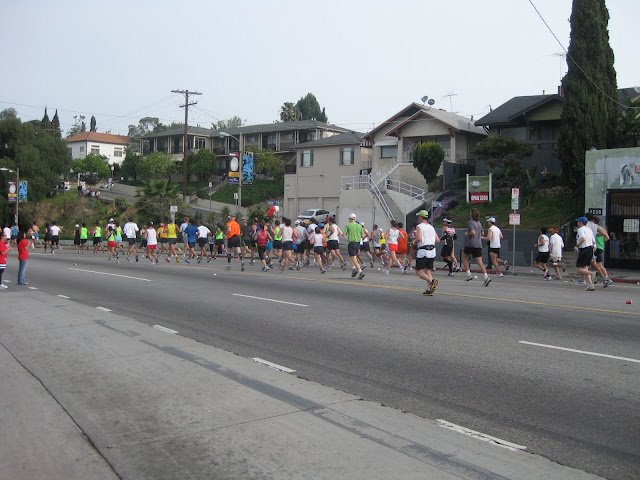 Cultivating the Age of Narcissism

It all started with the pre-natal ultrasound.  I don't know about you, but I'm not thrilled to be shown an expectant mom's ultrasound.  How am I supposed to react to these things?
"Wow, he's got your eyes!"

I've never seen an ultrasound that looked any different than any other ultrasound.  For all we know, the whole thing's a scam.  Those people who get all worked up over an allegedly fictitious moon landing could focus a little energy on the pre-natal ultrasound industry.

But the moms love to show 'em off.  In my day, you had to wait until you were at least born before your mom could start boring others with your image.

Really?  Look, I know she's proud of Taylor and all, but is that really the sum total of happiness for her - being an extension of someone else?  I thought we were past that.

And, do you really think I'm impressed by your bumper sticker?  I'm truly happy for you that your child reads at grade level at Suchnsuch Middle School or that your child has perfect attendance or whatever it is that you're bragging about.  But these stickers have become so ubiquitous that they're a bit like Special Olympics awards, aren't they?  You get rewarded for just showing up.  There's bound to be a bumper sticker for whatever it is your kid doesn't suck at.

Sorry.  That just came out.

Don't even get me started on Lifecasting

But now, just when it didn't seem possible to reference these kids any more than we do, the ad industry has created a new breeding ground for monsters of conceit -

(and in today's irony alert - yeah, I believe every random thought I have to be so important that I must post it on the internet for the whole world to read.  Funny that.)
Posted by Why S? at 1:15 PM 3 comments:

or you can start with Sinead -


OK, I want to talk about Ireland

Specifically I want to talk about the "famine"


About the fact that there never really was one


There was no "famine"


See Irish people were only allowed to eat potatoes


All of the other food


Were shipped out of the country under armed guard


To England while the Irish people starved


And then on the middle of all this


They gave us money not to teach our children Irish


And so we lost our history


And this is what I think is still hurting me


Has to drive itself out of it's head because it's frightened


Still feels all the painful feelings


And this leads to massive self-destruction


All desperate attempts at running


And in it's worst form


And if there ever is gonna be healing


There has to be remembering


So that there then can be forgiving


There has to be knowledge and understanding


where do they all come from


'Cos to do so causes permanent "psychological damage"


It's not permanent but they didn't know that


Anyway during the supposed "famine"


Through deaths on land or on ships of emigration


But what finally broke us was not starvation


but it's use in the controlling of our education


On and on about "The terrible famine"


But what they don't say is in truth


There really never was one


Where do they all come from


(that I can tell you in one word)


where do they all belong


So let's take a look shall we


The highest statistics of child abuse in the EEC


And we say we're a Christian country


See we used to worship God as a mother


Look at all our old men in the pubs


Look at all our young people on drugs


We used to worship God as a mother


Now look at what we're doing to each other


We've even made killers of ourselves


The most child-like trusting people in the Universe


And this is what's wrong with us


Our history books the parent figures lied to us


I see the Irish


That got itself basned in the face


And if there ever is gonna be healing


There has to be remembering


So that there then can be forgiving


There has to be knowledge and understanding


Where do they all come from

In the Wee Hours of the Morning, Something Shifted

K: We just had an earthquake.

Me: Are you sure? (but I'm thinking "strike-slip fault?")

Me: (realizing that 4:10 meant the time, not an estimation of magnitude) Call it.

Me: Call it.  Then we'll see how close you came.

We go back to sleep.

A Pictorial History of Economic Theory, from A to B

Remember when I said that Echo Park had been dubbed Red Hill because of the Socialists and other progressives who gathered here in the '30s?  That's all ancient history now.  But even as late as 2002 when K and I first moved here, there was a great lefty bookstore down the street. 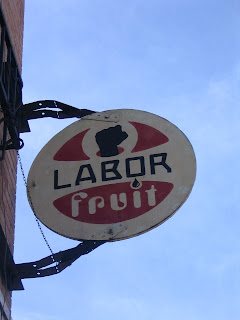 I loved the non-mainstream selection of reading material and I planned that, when the house was done and I had time to read again, I would become a frequent patron of the store.
The house and I took too long.  Quite a while ago, the old Labor sign was replaced with this one - 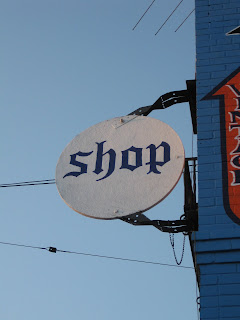 Falling a little behind on local events and happenings?  You can catch up here -

(warning: language in this video is not safe for work, your mom or my mom, but I liked it)

Isn't the real news exactly like this?  You know it's true.

No wonder we can barely think any more.
Posted by Why S? at 2:21 PM No comments: