Billy? Is That You?

I never got around to showing you the transformation of the library. I only started writing this in July. Ready to see some pictures? - 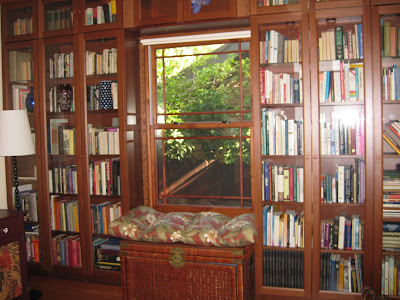 And to answer the question in the title, yep, that's him. That is indeed the ubiquitous Billy from Ikea: 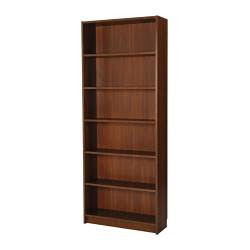 except, you know, with the glass front doors and moulding. But more about the moulding later.

I wish I had pictures of this room from before The Destruction. But, there was really nothing to photograph. Before we moved in it was just another room with white painted paneling, Listerine green carpet, broken louvered windows with security bars on the outside and an air conditioning unit stuck into the louvered windows with a piece of plywood holding in the a/c's lower half.

Yeah, it was something to look at.

Then, we took it apart. The door to the living room used to be way over to the side 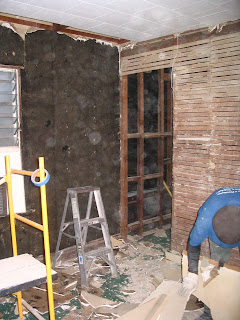 With the old window gone, we had a view to the great outdoors - 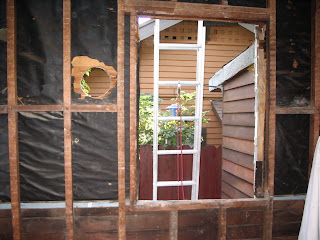 we also created a view to the living room - 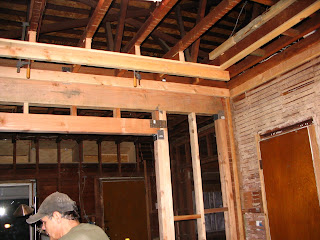 Fast forward to putting in the new window - 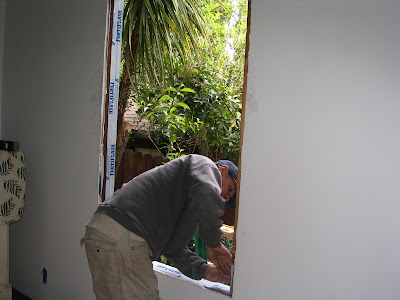 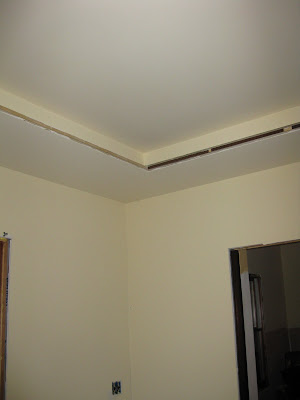 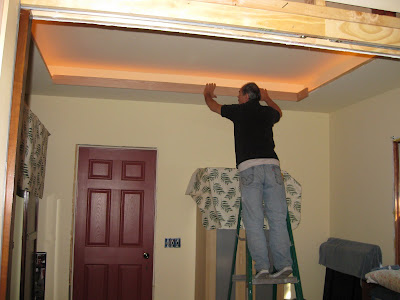 Finally, to give Billy that built-in look, K had to build him up with a little moulding at the base - 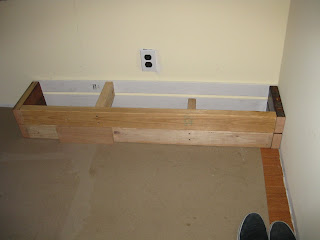 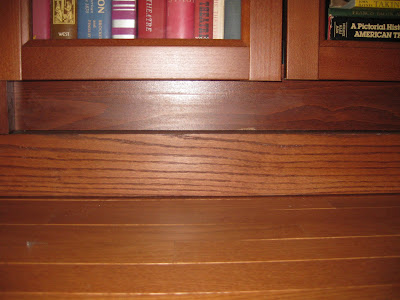 Now, K had to cannibalize a third unlucky Billy just to get the shelf that would straddle the window space. But first he had to create a way to hang the shelf, as it would have no natural support (the width of the window was greater than the width of Billy) 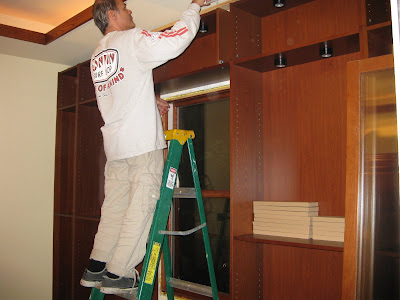 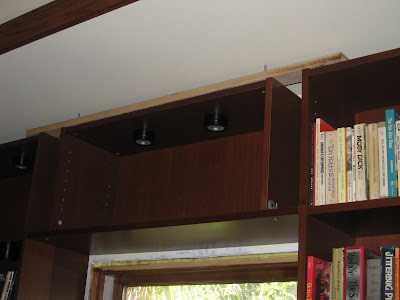 At last! we were ready to unpack our precious books that had been in storage for 6 1/2 years: 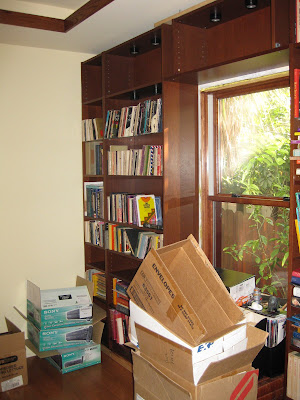 (I know, the timeline is not successive here. For some reason, the books had to be unpacked before the moulding was complete. I don't remember why.)

And here we are, theatre books on the left - 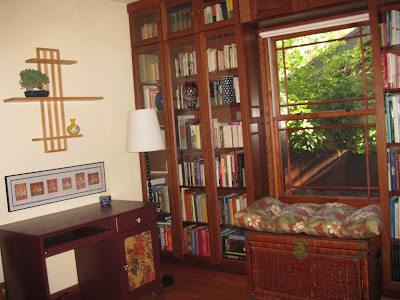 (remember the desk?)
All non-theater related books on the right - 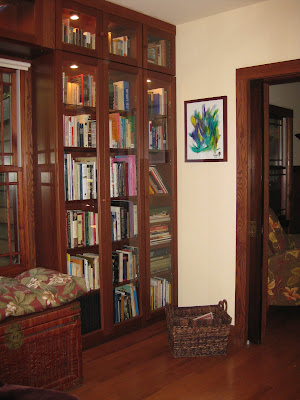 (note the painting, painted by an actual movie star. I'll tell you about that one day.)

The weirdly fortuitous thing is that that Billy's width exactly matched the wall space available on both sides of the window.
On the other side of the room, another fine Ikea product, Benno, holds our CDs and is dwarfed by the giant vintage armoire K bought at a thrift store - 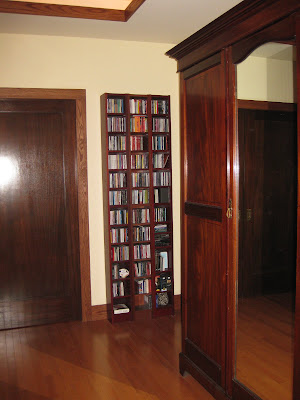 We bought this old wicker trunk at Montgomery Wards, probably in 1985. We've had it ever since and now it gets to be a window seat - 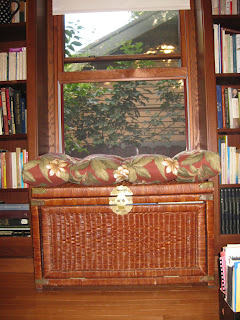 That's a patio seat cushion. I don't think I love it but it'll do for now.
She seems to like it - 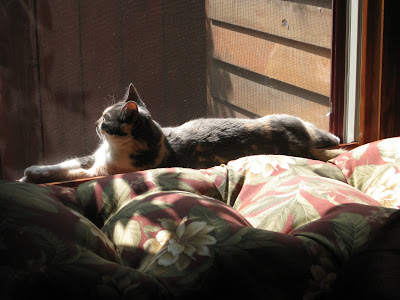 (update: I should have included in the original post that we don't have the luxury of having a room solely devoted to books. This was house's original and only bedroom and it now holds the only closet - the door is between the CDs and the armoire. So really, in addition to storing books, it also serves as a dressing room and with the desk, an alternative office space, alternative to the office space upstairs.)
Posted by Why S? at 12:40 AM

Alternative title: Billy, don't be a hero.
That looks great - you'd never know ikea was involved. K did a great job with the entire room. And I'm impressed that you actually have books in your bookshelf!! It is refreshing to see someone use book shelves for their intended purpose.

Bris, how clever you are with the titles. I wish I'd thought of that. Yes, we are huge book geeks. We both still have college text books. We've reached our maximum load though. Already there are shelves with books doubled up. I guess we'll have to read on Kindle or iPad from now on - or maybe just let a few go to good homes.

Wow - I could spend days in this room - it's gorgeous! And now I feel a bit better about the boxes & boxes of books I've had out in my garage for about ummmm, 7+ years.

"Billy the Bookcase says hello" alt title via Jonathan Coulter's Ikea
Our wee Billy has been with us for 20 years in 7 rooms in 5 different houses, in 3 countries on 2 continents - and they say ikea doesn't last!
Your bookcases look outstanding great work.

Kate, when you unpack those boxes, it will be like a reunion with old friends.

mm - Ikea certainly does last if treated decently. I think it gets a bad rap because like pigeons, it is so common. But it's affordable and functional and often quite beautiful (although, sometimes too kind of goofy) so it's time to give Ikea some respect.

I feel compelled to offer my own take on a title:
Ode to Billy Bo(okcase)

I like his Ron John Surf Shop shirt. Looks good. We have unpacked most of the books but cd's are still in boxes since '02 when we moved to the mainland. Need to work on that.

Thanks, NV. I guess I should have had a title contest. But Billy Bo never had a lick of sense . . .

Good call on the shirt, LB. That one must have slipped past my clearance staff. K loves that shirt, btw.