Here There Be Monsters (Not)

You probably thought I’d fallen off the blogging map. Not exactly. 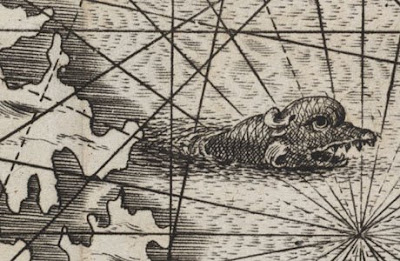 But I did get a bit out of my habits of blog writing and even my blog reading habit. See, I’ve been tidying up around the house. We’ve actually shown it to people! People being a few close friends. Then after we showed it, we've kind of been living in it. Yep, just living. What a concept. Wah! Wuh!!! How can it be? you say. Wasn’t your house a big, mess of drywall dust and ladders akimbo??? Well yes, it was. Now it’s just a big mess of being lived in. And Friday is our anniversary so it’s not getting tidied up this weekend.

I’ve got to catch up on a lot of blog reading.

Jenni’s been giving ThirteenEleven a break too. But then she broke her silence with exciting news about the source of all that mid-century pink . Good find, Jenni.

I know that NV has been doing a lot of hard work over at her D*mn House. I’ve been cheating, peeking at the pictures of the work on the kitchen cabinets. From what I’ve seen, they look pretty good. But I do need to catch up on the narrative. It’s always one d*mn thing or another over there and I really don’t want to miss any of it.

Jayne at The Kelly House has been busy too, between working and herding cats.

I suppose I could take the Blue Line to Long Beach this weekend and stalk down
LB Tudor at the Long Beach House Restoration Fair.

And I know I owe ModerneMama at The Beach House a list of 6 uninteresting things that make me happy. Happy? That’s a lot to ask for. Not really a trait I’m known for. But I’m going to do it. I promise. Just not this weekend. Maybe next.

In the meantime, as I write this I’m also catching up on a two week old episode of So You Think You Can Dance. I’ve got stuff to catch up on all over the map.
Posted by Why S? at 12:13 AM 5 comments:

An Appetite for Destruction vs. The Curse of Conscience

I won’t name names but somebody in our house 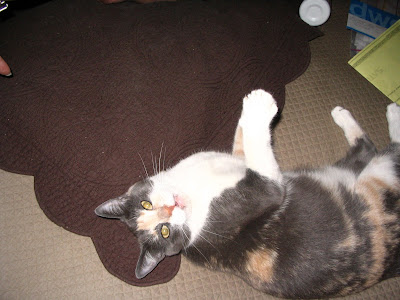 has been scratching the covering off my water hyacinth ottoman.
I love this ottoman. It has such a pleasing shape - 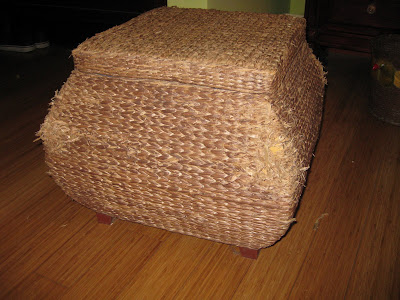 and the interior provides plenty of useful storage for a book, jammies and a set of colored pencils. It is the ideal height for putting on socks and shoes.
But I cannot abide the ratty, clawed edges and the bits and pieces littering the floor. 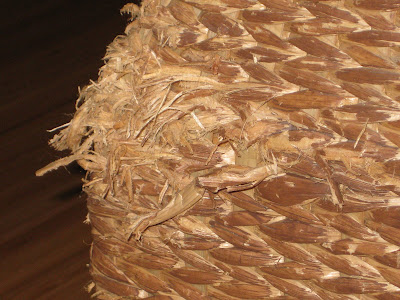 I recently found this ottoman at my favorite thrift store - 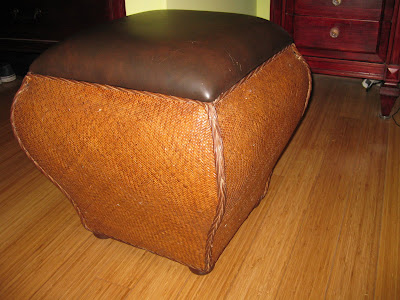 It seems more elegant but taller and the rounded faux-leather top feels a bit less secure for shoe putting on.
I won’t name names but somebody seems quite comfortable on it 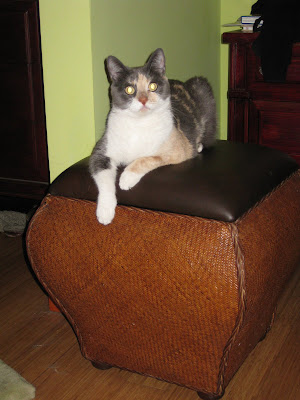 while seeming completely not inclined to scratch at it’s woven surface.
Now here’s my real problem. The old one is still perfectly fine (except for the covering). I mean the construction is solid. So now what do I do with it? Pitch it in the trash? Donate it? It would seem like donating trash.
Someone who sews could make a sweet cover for it. I’d like to see its shape in a nice toile.
But I’m not one to do it and I don’t have room for a second ottoman.
Would it even be worth it? It was $50 from the now defunct Linens & Things. Who would bother with re-covering it?
Someone suggested I put it on Craigslist. Maybe. I can't imagine who would want it in it's current condition.
Descended from a long line of people with furniture crowded houses, I find it hard to let go; hard to toss stuff just because I don’t need it anymore or don’t even want anymore. But to get my house where I want it to be, I’ll have to learn to let go.

So one way or another I’ll have to say good bye; even if it means covering the planet with torn up furniture just because some unnamed somebody couldn’t keep her claws to herself. 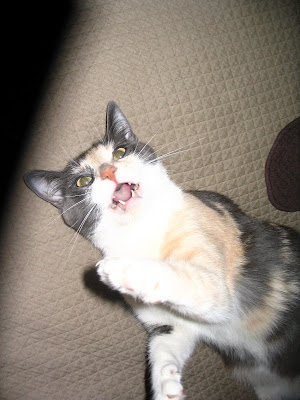 Did you know that Coldwell Banker has a channel on YouTube? Interesting enough for those with a house obsession. Not only are there videos about buying and selling homes, but there are also videos about specific neighborhoods and communities.

I looked at it briefly today and found this video about the L.A. River! What a coincidence!