Your line at the supermarket today was moving along just fine - then I got into it. So even though you might have been 3 or 4 people ahead of me, the moment I chose that line it stopped moving for you. Maybe the lady at the head of the line paid with a check and had to do the math before moving on. Or maybe the coupon clipper had a bunch of coupons that didn't quite match the items in his cart. Or maybe the cash register ran out of tape and the checker had to call for a replacement roll.

Whatever happened, I take full responsibility. It would have happened in any line I selected. I'm talented that way.

But if I did bring your grocery shopping to a grinding halt today, you have at least one thing to be grateful for this Thanksgiving - that you were buying your own groceries. You weren't at a food bank. You weren't dependent on the remnants of a generous farmer's harvest. You are not doing without.

I wish you a very happy Thanksgiving.

Perhaps you’ve noticed that it’s been quiet on The Hill. We’ve been on vacation. Friends who are working in London for a few months invited us to stay for a visit. Who are we to turn down the offer of free accommodations in London?

Unfortunately, I cannot yet regale you with pictures of our trip because photos were taken using an ancient medium called Film. I’m hoping to have pics back soon.

The trip home covered 5,000 + miles in 11 hours. This was followed by a rush-hour drive to Glendale to pick up the cat where she was boarded. That trip covered 27 miles in 2 ½ hours. Yes, yes, yes, it’s good to be home.

Post script: We returned to find that we have no Internet access in the house, so who knows when I will next post. Good to be home indeed. 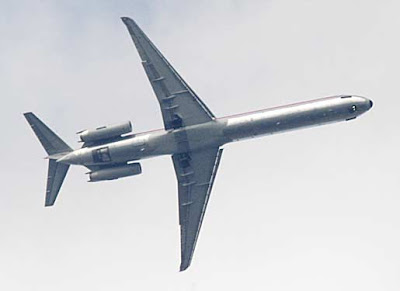 "Don't hate me because I'm beautiful." That's not me talking. That's the Mexican Sage in front of my house. I planted it about 4 years ago because it attracts hummingbirds. It grew. And grew and grew and grew. Out of control. But the hummingbirds like to sip from the flowers so who am I to complain?

But for all of this year, it didn't blossom at all, just grew taller with a lot of stalky leaves. So back in September, I decided I'd had enough of the leggy, overgrown plant and decided to trim it all back to the ground. Except I'd done some other trimming earlier in the day and when I'd only done about a third of the sage, I ran out of space in the yard waste bin. So I thought I'd finish up the next week.

By next week, the remaining plants were in full bloom. And the hummingbirds were feasting. Now what? 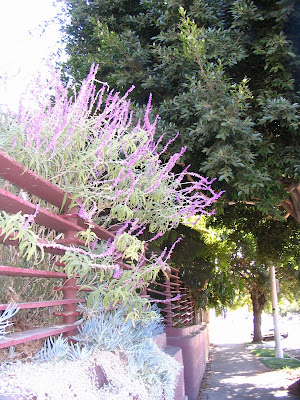 I'm not exactly in touch with Nature. I guess this plant blooms in the fall. Oops. So anyway, now I have a yard that is fronted with plants that are huge and over bearing on one end and low to the ground on the other end. 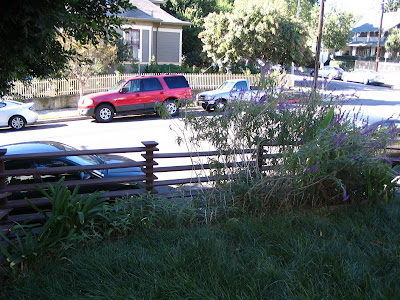 I've posted plenty of complaints about my neighborhood's less than felicitous features. It's now my turn to confess that my neighbors must think of me as the dorky homeowner with the annoying plants. "What doesn't she trim that thing back?" "Why did she trim some of them and not the others?" "When is she going to fix up her yard?" 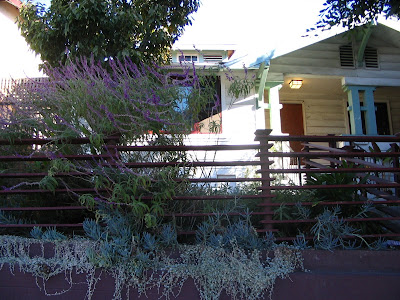 But what about the hummingbirds? I can't deprive them now.

I guess we all have our reasons for why our homes are less than perfect. A lot of those reasons are perfectly logical but not always apparent. 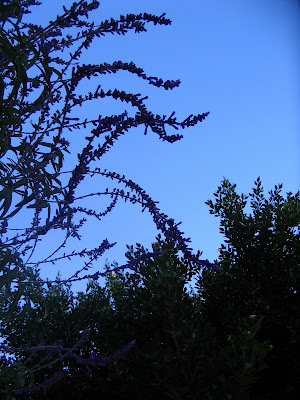 Day of the Dead - Parte Dos

On All Souls Day, K and I decided on a late afternoon visit to Olvera Street to check out the Day of the Dead action.

We took in the music and traditional dancing but I'm really there for the variety and creativity of the ofrendas installed in the plaza.

Olvera Street is a tourist destination and traditional observances in Mexico are becoming more touristy, but still, Dia de los Muertos is a sacred obligation in the culture. Therefore, as a tourist, respect is always in order. Keeping in mind that ofrendas represent real people, real lives and real death I just want to share the following: 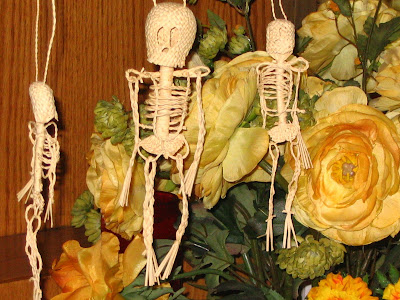 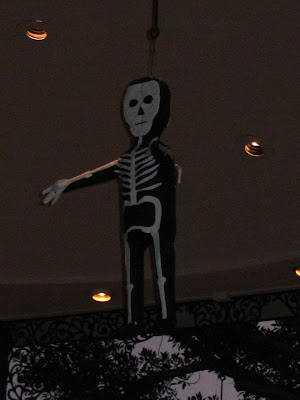 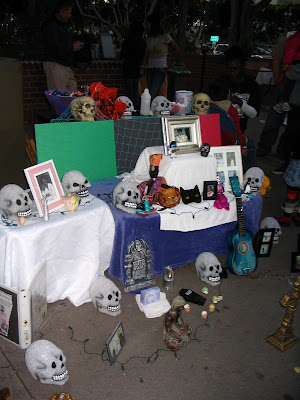 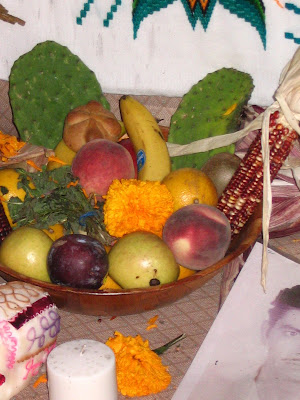 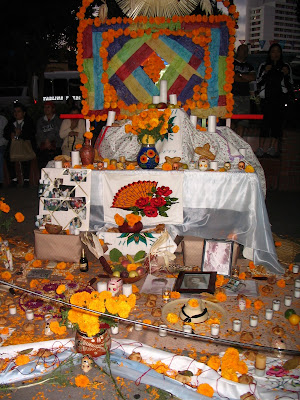 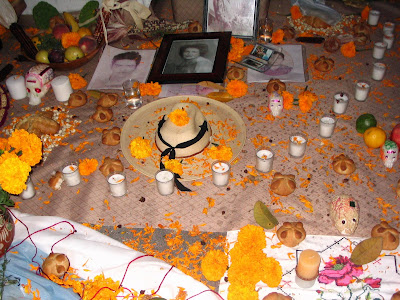 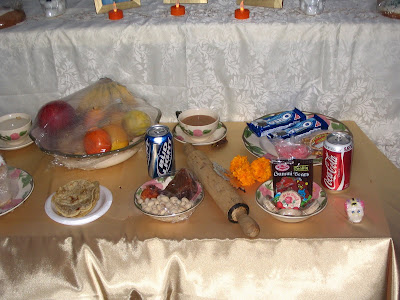 somebody enjoyed their Bud Light 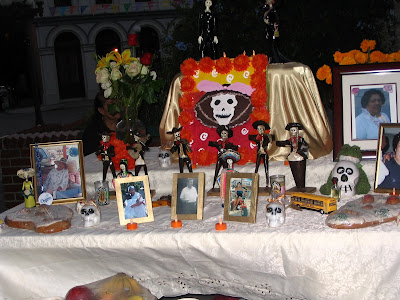 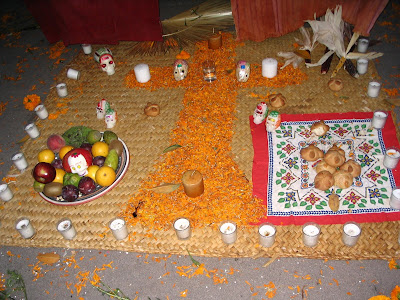 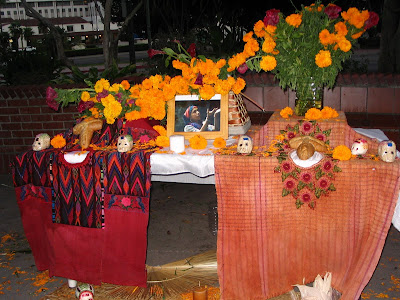 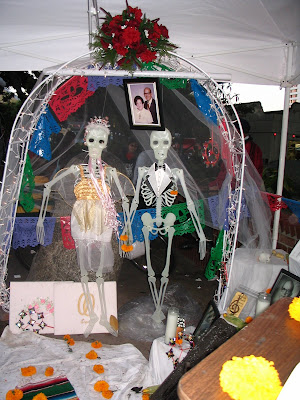 'til Death do us part. 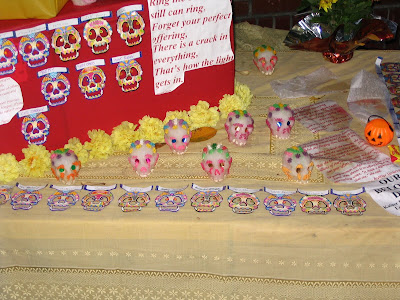 There is a crack in everything.

That's how the light gets in.

Your cares and troubles are gone
There'll be no more from now on
From now on ...

Happy days are here again
The skies above are clear again
So, Let's sing a song of cheer again

Music and Lyrics by J. Yellen and M. Ager 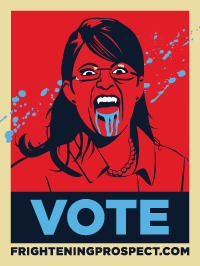 Frightening image thanks to www.frighteningprospect.com
Posted by Why S? at 6:00 AM 2 comments:

I love Day of the Dead. It may be my most favorite holiday - more than Christmas, more than Easter, more even than President's Day.

Like Groundhog Day, it's one of those days that marks an approximate half way point between an equinox and a solstice. In Mexican tradition, Day of the Dead is when the boundary separating the living from the dead is most thin. It is the day to communicate with those who have gone before.

In 2005, K and I had the privilege of accompanying my parents to Oaxaca, Mexico to visit with my mom's side of the family for Dia de los Muertos.

There are three main components to the celebration there. The first is the baking of bread. The second is the building of the ofrendas. The third, but most important, is visiting the cemetery.

The bread is baked into shapes of things found in nature - deer and rabbits and also saints and skulls. The bread is later distributed to visitors and also placed on the ofrendas. 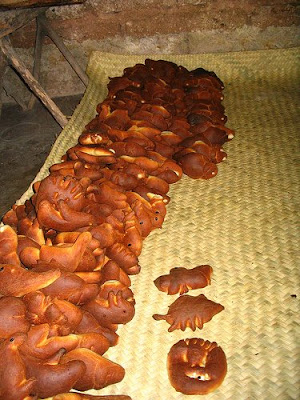 The bread we baked. Black beans are used for the eyes. 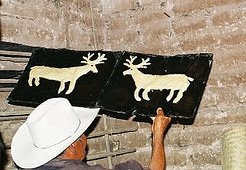 My uncle shows off his deer prior to baking.
The ofrendas are like altars that are built in the home. They are decorated with colored paper, flowers, fruit and candles and sugar skulls. Then, favorite items of the deceased are placed there. Typical items are chocolate, Coca Cola and cigarettes. Personally, if I were packing supplies for the Underworld, I'd want Diet Peach Snapple, Pepperidge Farm Goldfish and some nice olives, maybe kalamata. But that's just me. 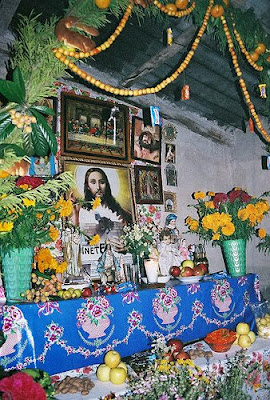 The ofrenda in my aunt and uncle's home.
The final step is the trip to the cemetery. What struck me the day of our visit to the cemetery was how colorful it all was but also how the ritual really kept alive the memory of those who passed. Each and every year, there is a ritualized reason to keep alive the memory of someone who may not be personally remembered by anyone still living, but whose life and history is maintained by the stories that are gathered and collected at this yearly ritual. Even those in graves with markings faded beyond legibility are remembered and celebrated. 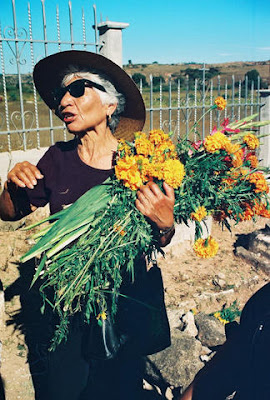 My mom, looking fab with flowers and Ray-Bans My mom and my aunt in remembrance 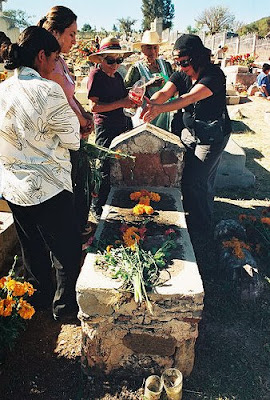 I'm sprinkling holy water here.
You can always tell the Americans by their sunglasses. Musicians are hired to serenade the deceased.

Day of the Dead is finding its way into US culture as well. There are annual observances at various sites in Los Angeles - some more traditional than others.

That is what the United States really is, isn't it? It's a blending of cultures, taking the best of others, mixing it up with what we think of as our own and making into a new reflection of us. 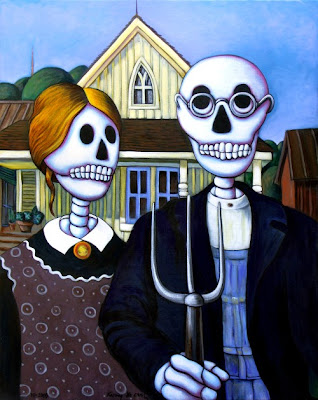 American Muertos
Spend a little time today thinking of those you've known who have gone before. Think of something about them that makes you laugh or smile. Maybe you can set out something that would please them: a bit of chocolate, a bottle of beer, a pinch of cat nip.

With each passing day, we are all closer to them than we like to think.

American Muertos is used with permission of the artist, Tony de Carlo. (See more of Tony's work at http://www.tonydecarlo.com/.)
Posted by Why S? at 3:03 AM 3 comments: