It's 5:47 am.  At 1:30 am, I had just finished some blog surfing while K napped in his recliner.  He awoke; put on his jacket and asked if I was ready to see The Rock.

Actually, I was ready to go to sleep.  I had forgotten about The Rock.

Thanks for the Dwayne Johnson photo, David Shankbone
No, not that Rock, silly.

This rock, the future element of the piece of art that will be known as Levitating Mass. 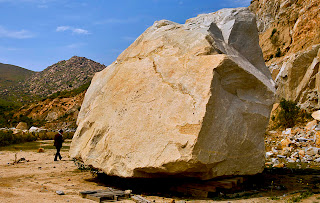 Thanks for the pic, LA Times.

If you don't yet know, it's a big rock, actually a 340 ton chunk of granite and it's being moved from its once comfortable home in Riverside to the Los Angeles County Museum of Art where it will be installed onto a 456 foot long slot.   Apparently, the public will be able to walk under the rock and "experience the illusion that it is floating above them."  Thus the title, Levitating Mass.

We hatched the plan this evening while I was on my way home from work.  I was stopped at a light when I saw that the traffic light on Wilshire Blvd. was being dismantled.  Of course, I knew it was to make room for the passage of the Rock.  I called K because I thought  this tiny detail might interest him.  That's when he said he had been thinking we might go to see the Rock on the last leg of its journey.  So near us, why not?

At about 8:30, it seemed like a good plan.  Five hours and a martini later, mmm, maybe not so much.  But K was determined and out the door we went.

It was fun - a bit of a carnival atmosphere.  People were happy and in a good mood.  Everybody was taking pictures.  People brought their dogs.  And you know, it was all about a big rock.

I don't yet know how I'll react to the experience of walking under the rock when the installation is completed.  I actually know very little about the project other than the journey of this rock has been in the news all week.  But this is what I'm taking away from the experience tonight: I feel inspired.

The artist, Michael Heizer has wanted to do this project for 40 years.  First he had to find the right rock.  And then he just had to come up with the 10 million dollars to do it.  And someone  had to plan a route for a giant piece of granite that would be transported on a truck the width of 3 lanes.  And then the city (of LOS ANGELES! no less) had to dismantle all the traffic lights along its path for over 100 miles and it had to be driven at about 2 - 5 miles an hour for 9 days.

Most people, if they ever got such idea into their heads, would quickly come to their senses and say, "Naw, that's never gonna happen."  But, I just saw it happen.  I saw people cheering at seeing it happen.

So . . . what project do you have in your life that you say you really want to get done but you haven't done it yet because you have this excuse or that excuse?  Maybe it's too expensive.  Maybe you don't have time.  Maybe it's just not practical.  But, your project, your dream, is it as impractical as dragging a 340-ton rock for over a 100 miles at the cost of over 10 million dollars?  And do you have to take down miles' worth of traffic lights in the most car-centric city in the country?  And then, do you plan to devise the mechanics to float that 340-ton rock over the public?  Probably not.

I have a theater company.  It's just starting out and right now there are only two of us doing pretty much all the producing work.  Last year we produced our first show, 2 very small plays with 4 actors total, one of the actors being me.  It was a modest endeavor but a good way to get our feet wet in the world of producing theater in Los Angeles.  This year, we have a bigger project.  Much bigger.  It's a full-length play in a new translation and a cast of over a dozen.  The budget will likely be twice that of the first production.  Sometimes, I think we've lost our minds, the director and I.  I wonder how we're going to pull it off.  I get a little discouraged at times.  The last show was so much work.  I was exhausted day after day after day.  There was never enough time and never enough sleep.  I got discouraged then, too.  I cried at rehearsals.  I cried in my car.  I wondered if we'd lost our minds thinking we could pull off this creation all on our own (and act in it too - all while building a house of cards).

And this year, bigger play, bigger budget.  Surely, we've lost our minds again.  Or soon will.

So, maybe we have lost our minds. And maybe Michael Heizer lost his mind a long time ago.  But right now, he's got a big rock sitting on the grounds at LACMA.  And soon, we'll have another play to be proud of.  Better to lose our minds than our nerve.

I saw something about this on TV the other day.

Seems like they could have found a rock that was a little closer to the final destination....LOL

The universe provides. Intentions are good and it will be possible.

Thank you for this! Needed to hear something like this about now. That big rock hanging over your head isn't always a foreshadowing of gloom and doom ... it might be just someone's artwork!

Hi Jan! I'm sure he would have liked to find a rock closer to the final destination but he looked for 40 years before he found this one - so I guess they've been waiting to find each other.

Thank you, Phoenix Painting for your support.

As for you, NV, we are all part of someone's art work (or so I like to think.) The problem is, art doesn't work without tension and conflict - so here we are - doing our part to support a more interesting Universe. Keep calm. Carry on. It's all we can do.