Our Living Room - A History

Anyone who doesn't like seeing Before and After pictures can stop reading right now.

It so happens that today was our Housiversary. We moved into The House on Red Hill seven years ago today. Happy Housiversary to us!

Over the years, I've taken a lot of pictures and the living room seems to be the favorite child. I took 'em so now I'll post 'em.

This one was snapped while the house was still in the hands of the previous owners. I think it was our inspection day: 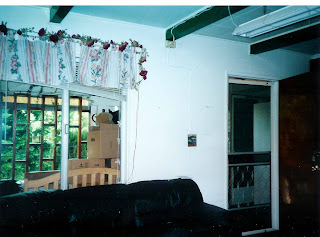 Go ahead, click on it; make it bigger. Now, I beg you, do not fail to notice:

c) fluorescent light fixture, attached to the ceiling with string

f) stack of boxes on porch, not in anticipation of imminent move but because adult daughter kept her crafting supplies in boxes all over the house. I don't know what she had but she had a lot of it.

The plastic flowers along the top of the window seem anti-climactic at this point.

This is a picture of the opposite wall. You get a much better view of the light fixture and the Listerine green carpet - 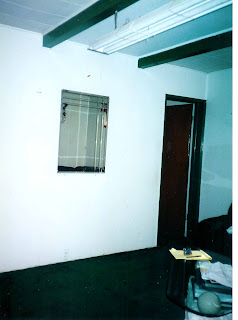 The mirror must be a Feng Shui thing. Couldn't hurt.

We slept in that room for two years while K worked on the master bedroom (which had been a 2nd kitchen). Work took him on the road a lot in those days so the bedroom took a while. During that time, we heard everything on the street from the comfort of our bed. We heard midnight conversations of pedestrians as well as the neighbors who start their cars at 4 am, warming up the engine for 10 minutes or more before leaving for work. Is that really necessary in this climate?

One day, I could no longer stand the bright white paneling. While K was out of town, I went to town with a can of paint. I figured I needed to test possible paint colors anyway. I think this is Majolica Green from Sherwin Williams' Art and Crafts Preservation Palette. 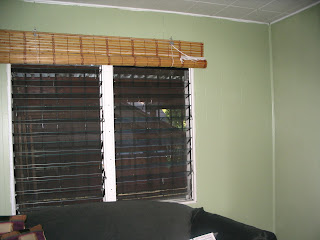 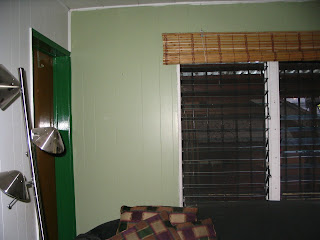 What a huge difference and much easier on the eyes and the soul. But while I liked the color, I didn't think I wanted to live with it on my walls. Good thing I tested.

In November 2007 we demolished all the public rooms. 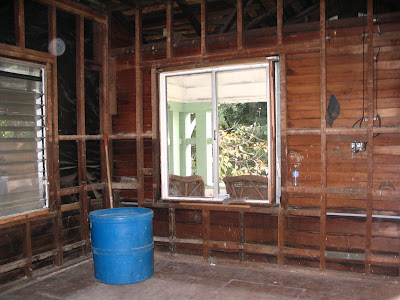 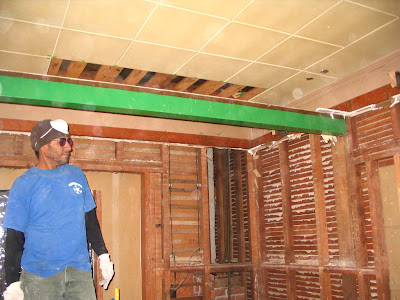 I'll fast forward through the next 18 months: In goes some insulation - 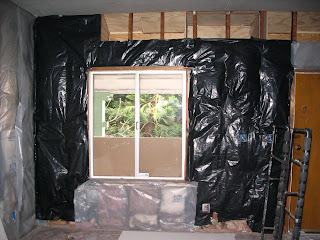 Up goes the drywall - 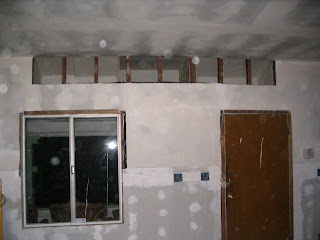 Out go the old windows - 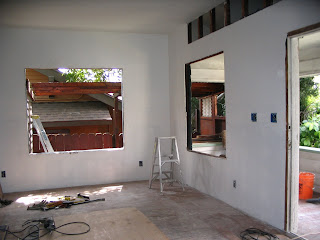 Here is my K, either prepping for the new window or just monkeying around. Could be either one - 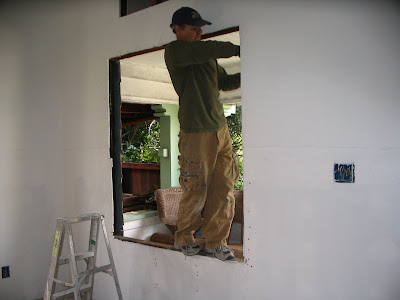 On goes the paint - 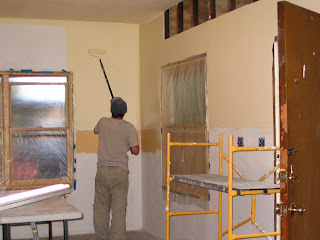 I decided on Sherwin Williams' Tealight. We tested the darker Hubbard Squash on the area where the wainscoting would go. I decided against it for such a large surface. That was probably a mistake and I'll tell you why later.

Up go the red oak panels - 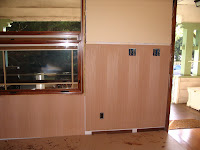 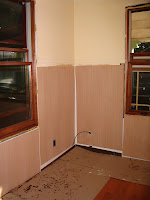 They remained un-stained for quite some time. Like from October of '08 to around May of '09.

But it finally happened - 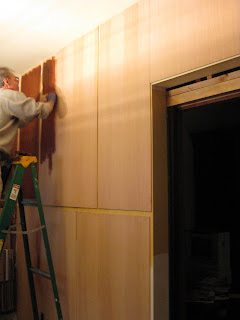 and now we have this - 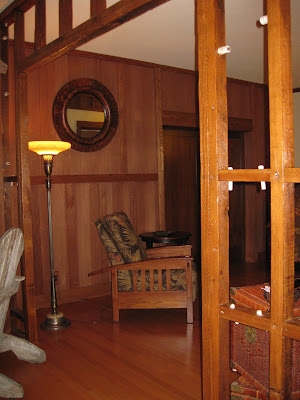 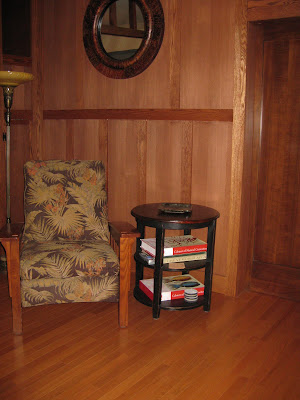 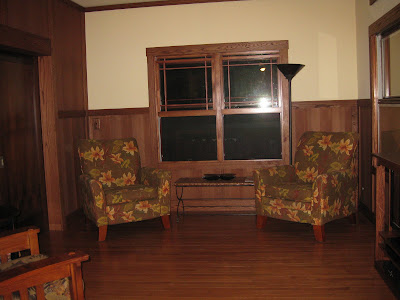 I think the Tealight color doesn't stand up to the darker paneling. It was fine when everything was white drywall and pale, clean oak. But now it seems to wash out. Depending on the light, it can seem almost white. No wonder all those Arts and Crafts colors are so dark. Oh well. It's fine for now.
Had enough? I'll be back tomorrow with the little details (like why that one wall seems unfinished - but isn't).
Posted by Why S? at 11:01 PM

That's a beautiful room! I love before and after pics!
I have some of our project, too, here, if you're interested:

Thanks for stopping by the beach house!

Oh. My. God. AWESOMENESS! Truly in awe of all the work you've done.

And I'm still marveling at how you didn't run screaming from the house based on that first couple shots alone. :-)

Wow!! What a difference! I guess I'm lucky the beams in my livingroom aren't painted green. lol

Thanks for sharing the pics, I love seeing such progress. :)

Thank you, eveyone. And NV, I kind of did run screaming. I asked him no fewer than 5 times if he was sure he wanted to buy this house. But he never changed his mind.

I could have nixed it, but if we were going to wait for the house that looked like we wanted, in an area we wanted and at a price we could afford, we'd still be waiting. So now, after much sweat equity, (and a chunk of HELOC) we have a house much nicer than anything else we saw.